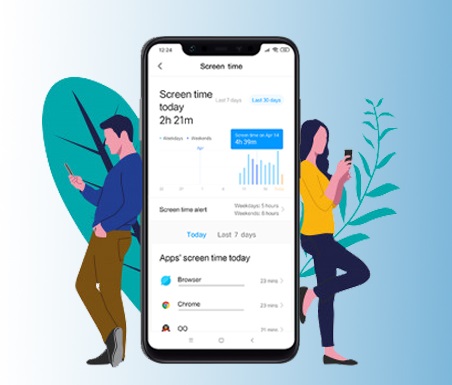 Android pie is the latest operating system which is developed by Google under the ownership of Android. Almost 65% of phone companies processors preferred the Android operating system, over any other operating system. Android pie has many such amazing facilities and features which make it one of the simplest and clean operating systems for any smartphone. With continuous updates and up-gradation in the software, Google makes it easier for the users to use their phones conveniently and with ease.

Due to the increasing development of phone technology and the popularity of these techniques among people, today people are using their phones very frequently. Most of us use our phones to do every single work. Thus it becomes a matter of debate of digital wellbeing and to check activities on your smartphone. Probably it’s beneficial to have control over our uses and maintaining a concentration on the amount of time we spend on our smartphones. This not only helps us to study our behavior but also shows how much efficiency we put towards any work.

This article basically focuses on this matter on which we would be discussing some simple methods by which, you can monitor your activities and screen timing on the latest Android pie. And do not hesitate to control your activity and screen time. It is not an exceptional achievement. It is a major step toward monitoring your own self so that you are not addicted to these growing technologies.

So here are some of the methods by which you can check your screen timing.

This is an initiative taken by Google itself in which it was considered to monitor screen timing so that users can definitely know what are their percentage of time that they spend on their smartphone. As the name itself suggest digital well-being means how efficiently and correctly you are using your smartphone, which is having a tremendous amount of technology and source of knowledge. The main idea behind this concept was to make people aware of their connectivity with the technology and to tell them whether they are using for misusing this technology. The design of digital wellbeing is very clear and simple. It shows different types of uses, which could be sorted by the user according to them. This includes app uses time notification and even the unlock count. There are some of the additional features like do not disturb mode and night mode which are essential in this condition. These features can even be scheduled to be automatically switched on, during a particular period of time. This app is generally inbuild in Android one operating system supporting devices or the pixel phone which is developed by Google itself. To check your screen time directly go to settings and open digital wellbeing. Here you can monitor your usage.

If you do not use pixel phone or any other Android one operating system supporting phone and do not want to install any third-party app on your smartphone, this option would be an ideal solution for you to check your screen time in Android pie. just make sure that you have the latest Android version installed on your phone so that the below-mentioned steps could be easily related to your actual screen. To check your phone usages, go to settings and open power usage which will be found in the battery option. Then tap on the 3 dot menu and choose full device usage. You would be shown a graph which would be about your battery percentage depletion level. But this option of graphs can only be seen in the stock Android smartphone and not on an operating system having skins over stock Android. Although the principle of power usage remains the same in all the operating system but with a different interface. But this method has a drawback. You can check your screen time since the last charge and cannot sort the statistics by different categorizations like days, hours, weeks, etc.

If you do not want to go with the second option you can directly switch to the third option and can install a third-party app that would give you certain benefit over II option. You will be able to monitor all your statistics of phone usage which would definitely include the number of unlocking, time spends on the phone, different apps usage and other related information which you can even categorize according to your wish. The main disadvantage of this third party app is that your data could be misused by the company. So install only those third-party app which is developed by completely trusted developers.

Above mentioned steps could be followed to find how much time you spend on your smartphone and to know your activity on your smartphone. It is rightly said that ‘it totally depends on the person whether to use or misuse technology’. I hope this article would have increased a bit of your knowledge and motivated you to do you have control over your actions on your smartphone.